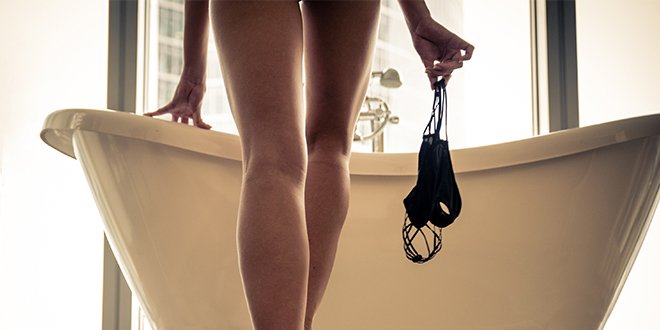 I unbuttoned the last button of my shirt and held my breath as the silk slid down from my naked shoulders. My reflection smiled at me from the mirror, encouraging me to let my eyes wander across all of my anatomy.

The sound of water rushing to fill the tub was thunderous, enveloping the room and making me feel sufficiently secluded. I put my hands on my sides and let them walk upward, noticing how my skin bristled. I watched in the mirror as my nipples hardened as my fingers approached then, then shuddered as their tips made contact. I let the pads of my fingers travel at will, until the glass in front of me fogged almost completely and I was only able to see my own silhouette.

I started suddenly as I felt water splash against my leg and I turned the tap off quickly. The bathtub had filled more than I had intended, it was too late to let the rushing water mix to make a bubbly froth, but it didn’t matter; I had an expensive bath oil I saved for special occasions. Mixing gently with my hand, I slowly eased my body into the tub, letting my skin get used to the hot temperature. Once I was submerged to the shoulders, I reached for the stool that had placed next to the bathtub and pulled it closer to I could easily grab my glass of white wine. I sighed before taking a refreshing sip of the chilled liquid.

All thoughts of things I had to do, people I had to call, work that needed to be finished – I was leaving all these thoughts outside the bathtub so I could concentrate on enjoying this moment of relaxation. Letting hands resting on my thighs, I was surprised by the softness of my skin and I stroked them, little by little, trying to discover if the rest of my body had that velvety feel.

Was it the oil? The new body butter I’ve been using? Whatever it was, I shivered slightly as my fingers found themselves caressing by inner thighs.

Taking another gulp of wine, I devoted myself to exploring myself completely. Despite the water, I realized there was now a wetness that was entirely my own. It had been a few weeks since anyone, including myself, had felt that – not for lack of desire but of time.  However, now I had the perfect opportunity to remedy that.

The other hand joined her partner and caressed my clitoris slowly. An epic battle was going on in my mind between the desire for sweet liberation from my self-imposed abstinence and the desire to extend this pleasure as much as possible. My index and index fingers then came together form rhythmic, circular movements. My eyes were now closed, and my body was slipping in the bathtub, the water almost brushing the hair falling from my high bun…

However my body wasn’t quite ready to relax; it needed more. I was dying to feed a desire deep inside, and without trying I knew that my fingers would not be enough this time. Next to my wine I had laid my favorite toy, so I pulled it into the warm water with me.

Examining its length excitedly, I surprised myself by indulging in the sudden urge to lick it, and put its tip between my lips.

Closing my eyes, I could almost imagine myself no longer alone in the tub. I was dying inside for the sum of these feelings; the slight self-consciousness for my impulses, the excitement that made me not care, and the singular desire to give my body the orgasm it craved.

I submerged it again and brought its tip to my clitoris, teasing for just a second before pushing its full length within me.  I moaned as I reached its handle, and moved my hips and I took in every inch of its surface, out and then in.

But I needed more.

Flicking on the lightest vibrations made me gasp, and then groan as I found my favorite setting; not a steady hum or a pulse, but a undulating pattern that seemed like it grew deeper with each wave.

It was no longer the water that surrounded me, but the soft, wrinkled sheets of her bed.

It was at that point that I couldn’t stop, even if I tried, and so I let myself go. I thought once more about her curly black hair, the breasts that were hinted at in those V-neck sweaters, the legs I couldn’t help but follow with my eyes whenever I saw them.

Something exploded inside me with a force that spread throughout my body, and in an instant the vibrations became torturous against my sensitive clit.  I pulled it away and let it vibrate underwater, closing my eyes to settle the ringing in my ears.

Minutes later, when I was able to open my eyes, I could see my legs still trembling under the water, lightly rippled by the toy at my feet.